The last two days have been very reflective as I say goodbye to our BBB ("Big Blue Bertha"). This is not just a motorcycle, a Nomad 1600 Kawasaki Tourer .... this is BBB, she represents our freedom, an escape from the pressures of life.

In 2003 my Mom passed away while we were in a battle to save our business (based in Toowoomba, Queensland) from a hostile takeover attempt by a huge multinational. This battle was draining not only of our resources but also on our energy, stamina and faith - the lengths that big business will go to in order to stamp out competition is quite astounding. We (Bonnie Ronnie and I) needed an escape and remembering the exhilaration that motorcycle riding had provided in our youth, we decided to save a deposit and purchase one. During our research, we both fell in love with the NomadVN Kawasaki so we put up a picture for motivation and in 2005 we were ready to purchase a brand new Nomad on HP (This had nothing to do with the business and I've alway been a stickler for keeping the financial aspects of our personal life and business separate).


BBB was assembled here in Australia in June 2005 and we took delivery in July. Our business had just survived the hostile takeover attempt. In addition, a twelve-month court battle to evict destructive none paying tenant's from our home in Petrie was successful (we were renting accommodation in Toowoomba). Our very first ride was to retake possession of our home and it was during this ride that we named BBB. What made the ride so memorable was the heartbreak and devastation felt when we entered our home in Petrie. There are no words to describe the stench and destruction which assailed us, causing us to dry-retch.

There were many trips to Petrie over the following eight months as we repaired floors, walls and replaced all the fittings and the joy of riding BBB back and forth the only highlight during that period. We eventually sold the house in Petrie and bought one in Toowoomba. (Yay no more rent!).

We decided that we needed a purpose for our rides and so the search for the ultimate Aussie Hot Dog began. What a wonderful escape BBB provided, we rode around the countryside in all weather, went camping, rode through a pub at Aratula, attended Blues festivals and had many a glorious ride.

Our quads grandchildren were born and I had my one and only accident on their (the surviving three) first birthday while on my way to work that morning. An old wooden railway bridge on a double 90 degree 'S' bend was covered in ice. The surface of the bridge was not visible until one was committed to the bend and whilst I was only travelling about 10kph BBB is close to 400kg so down we went as she lost her grip. Fortunately, I didn't break anything and only lost a small chunk of bark as my knee made contact with a protruding coach bolt. BBB wasn't as fortunate suffering a twisted frame, torn radiator, crushed muffler and pannier. The fun came when I went to lift her, it would have looked hilarious as my feet kept slipping out from under me and we would repeatedly become a tangled mess in the middle of the bridge. Finally, I managed to raise BBB and so there I was on the wrong side of BBB at her rear on this little wooden bridge with ice everywhere balancing myself and BBB by hanging on to her back rest.... the trick was to get around her ample rear end, mount her so that I can ride her off the bridge without breaking anything so I looked up to see if there was anyone I could call on for help. There just stepping onto the icy bridge from the opposite end is this tiny little old lady of at least 80 (if she was a day) - "hold on sony I'll help you", she says. Beyond her, I could see her little car with hazard lights flashing and there is not another soul around. "I don't think you should come any closer, you could slip and fall!" I said with a vision of the old girl breaking a hip. Undeterred she came up to me and insisted that I let her help. I had her stand behind BBB so that if the bike fell she would be out of harms way and just balance the bike under instruction to let go and remain still if it started to fall. I was able to get around and mount BBB and rode her off the bridge where I saw the little old lady on her way.

In 2009 our youngest grandchild was born to my son and daughter-in-law. I have thousands of photo's of BBB and our adventures, of our grandkids all dressed up in our gear, climbing all over a parked BBB as my daughter-in-law refused to allow them to ride with me. Our eldest grandchild by a year (my daughters, stepdaughter) on the other hand absolutely loves riding with her Poppy with the blessing of my daughter and son-in-law.

On our return things had not gone as planned as far as the business and finances were concerned and we lost everything including our family home. Fortunately, a couple of customers/suppliers who had become dear friends allowed us the use of BBB on the proviso that we bore the responsibility for registration, insurance and traffic violation costs. My health had improved for quite some time and we enjoyed our rides but as with all good things, the tide turned and my heath took another backward step only now my beautiful Bonnie Ronnie lost confidence in my ability as a rider. Ronnie was apprehensive and tense when she climbed aboard BBB, even on short rides.... it was no longer an escape, exhilarating or enjoyable. The time had come to close the book on this chapter in our lives and so BBB has been returned with our gratitude to her owner. 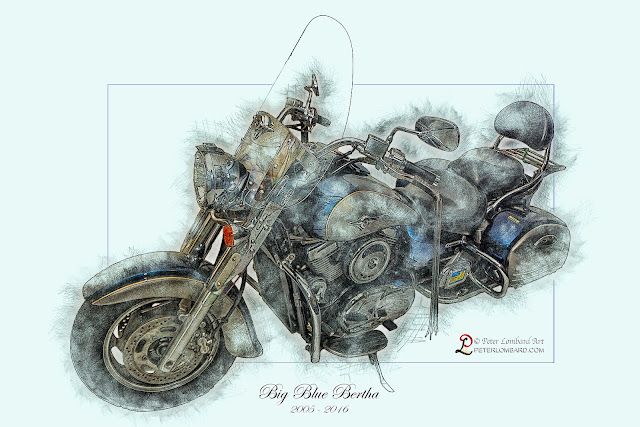